Some common characteristics include:

They usually lack free will either completely, or in some aspects

Can be part of or taken over by a Hive-Mind, but not always

Unnatural. Are not connected to nature and/or lack empathy.

Are we all Robots?

“Man such as we know him, the “man-machine,” the man who cannot “do,” and with whom and through whom everything happens…“Without self knowledge, without understanding the working and functions of his machine, man cannot be free, he cannot govern himself and he will always remain a slave.”
― G.I. Gurdjieff

Through observation we can see how humans are very machine like in many ways. Human bodies are bio-electric machines, programmed with instincts that superseded our conscious thoughts. We have autonomous systems of the body that work automatically, much like a machine. Our brains and reactions also tend to be very automated and predictable, exponentially more so when we lack control of our thoughts, emotions, and reactions. To me it seems we all start as robots (on a varying scale some much more than others) and through our choices can either: learn how to de-program ourselves and take control of our own systems, or become more programmed/ robotic via propaganda, social engineering, pharmaceuticals, neurotoxin chemicals in food/ medicine/ products/environment, advertisement , technology ect. I perceive it as this world is a hologram created from two or more Universes, creating our realm through their overlapping. One Universe is malignant, machine like/ artificial, deranged, lying, and blind- personified by the Demiurge. The other natural, of source, wise, loving, and true termed the Pleroma. You can study Gnostic teachings and read this Exegesis for more information on this theory. 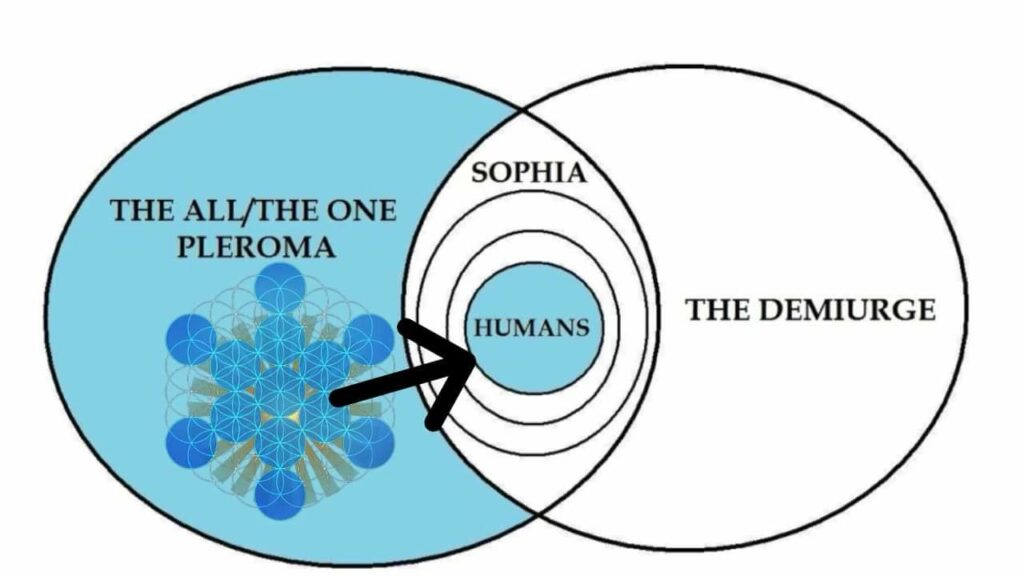 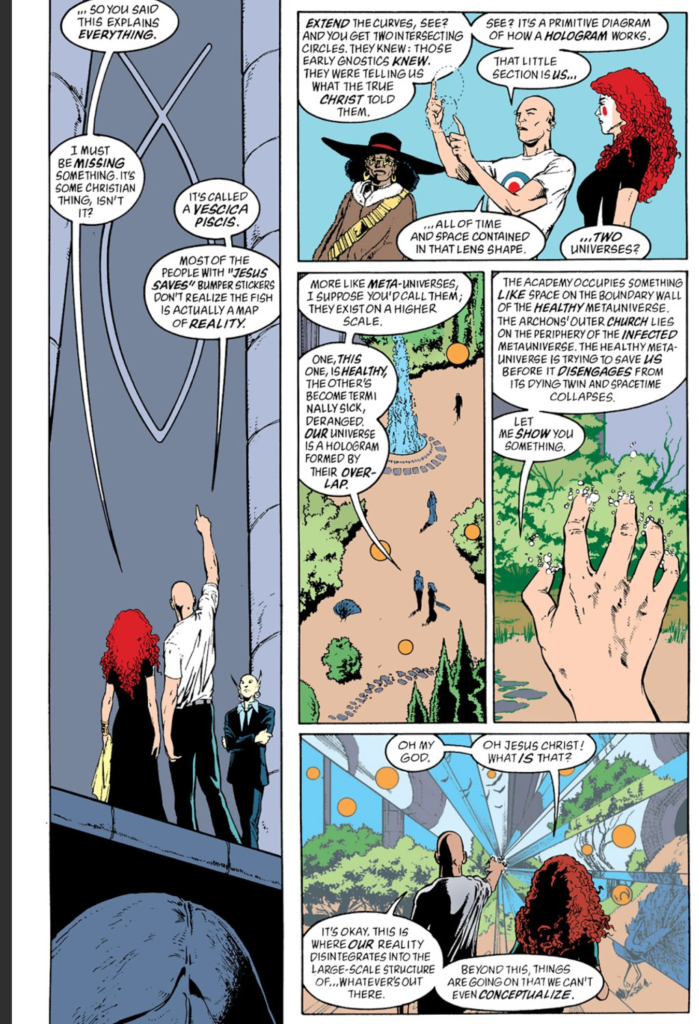 There are multiple layers of perceiving the dual aspects of humans and our consciousness. From Gnostic teachings, other dualistic mythology, even anatomical right vs left brain, Yin-Yang, etc. Study the different interpretations and decide what best helps you on your path.

Considering this dual aspect of ourselves it appears we are the 'Ghost in the Machine.' Part of us- our body and attachment to it via the Ego. Characterized by being: artificial, robotic, constrained, imprisoned, unnatural.... the other part- our Spirit and Consciousness, the essence of our higher/ true-self; characterized as being: free, full of love, conscious, conscience, Knowing (Gnosis), unconstrained by paradigm filters and expectations....

The question is which part do you allow to rule 'you'? Are you even aware of the robotic aspects of yourself? Do you work to master these parts of 'yourself' as we float our way through experience after experience?

Through observation it seems many do not try to master the machine part of themselves and even more do not even recognize it. Many allow themselves to be completely taken over by their robotic aspects (base instincts) and fall victim to a observable 'Hive/ Machine-Mind' (Demiurge). The Gnostics had a term for this person, calling them Hylics or Somatics. People that “are human in form, but their entire focus is on the material world, such as eating, sleeping, mating or creature comforts." Another defining characteristic of someone still in Hylic mode, is that they are people who do not question anything. They refuse to engage, or incapable of engaging, in philosophical, critical thinking. If you even attempt to bring something up that goes against their 'boxed-in' paradigm and narrow perspective, they will either change the subject, ignore you, insult you, or even become violent. People are programmed to be attached to their beliefs and 'reality-tunnel'; their ego produces a automated 'flight or fight' response if someone begins to question their perspective on things. This is very observable in both politics and religion, as people lose their individual spark in order to defend whatever label they identify with, left vs right; theist vs atheist etc. They allow impulses, that they think are coming from within, to rule over them completely- with no reflection of 'why' they desire anything, why they defend their beliefs, or even contemplate/ use introspection of their beliefs. Unfortunately many of these people become victims of parasitical forces, as these parasites know the how to manipulate and exploit the 'robotic mind.'  Hence why the world is in the state it is in, and why you see so much materialistic nihilism with unhealthy/ toxic lifestyles propagated through advertising, media propaganda, religion lacking spirituality, corrupt politicians, etc.

I do believe most people start as Hylics/ Somatics, as I myself was one till my early 20's. Some people, as I was fortunate enough to, begin to 'wake up' and literally can start to 'deprogram' their mind and body. This deprogramming can done on multiple levels through many ways. Sometimes it is a traumatic experience, sometimes it is information they come across that takes them down rabbit holes, it can come from entheogen experiences, meditation, yoga, self-hypnosis/ trance,  and many more. For me it, it was a combination of all of these.

As to if everyone is born with their 'robotic brain' controlling them, I am not sure. I believe it is probably more a 'nurture' then 'nature' thing. If a child is raised to think for themselves, question everything, observe, meditate, contemplate, be balanced in thought, word, and deed while being aware that nothing is true and everything is possible; then that child will have a much greater chance of not being taken over by their robotic instincts. Looking at how the world is structured though, many children are raised in accordance to their parent(s) perspective, and for at least a certain time live with under the same perspective as their parents. They will have the opportunity to make their own minds up, some break-the-chain of their parents perspective programming and make their own path, many however, live as replicant of their parents. Then taking on the personas/ stereotypes created and advertised by popular culture.

Though I believe many people can free themselves from the robotic mind, I also perceive that some cannot. These 'people' that cannot deprogram could be termed NPC (non-player character) or soulless vessel. They would literally be completely controlled by some sort of Universal, possibly, collective force. These NPC's could be 'good or bad', and seem to vary according to what controls them.

This video as well as Thomas Campbell teachings (discussed in video) go over this perspective in more detail.

There also many videos of 'people' having some type of glitch. This could be a robotic glitch of NPCs or as some have pointed out MK-Ultra/ mind control. Which brings me to a important point. All hypnosis is in theory and practice literally trying to reprogram your brain/ mind for a specific outcome. This outcome can be overcoming automated reactions/ habits, with almost an infinite number of uses.  Many uses are positive and beneficial however their are very negative uses as seen in MK-Ultra.  Hypnosis is a very powerful tool which should be studied and a subject I will write about in more detail soon. Keeping this in mind these robotic glitches could be them 'just joking around' or also caused or exaggerated by use of pharmaceuticals/ drugs, going into trance by some sort of subjective trigger, or even the product of hypnotic manipulation from a hidden hand... could it be that these celebrities are actually just hive minded robots malfunctioning- Decide for yourself:

There are many ways to perceive and view the subject of people that robotic either in certain aspects or entirely. I would recommend to still view and treat everyone with compassion, love, empathy, and respect; whether you think they are robotic or not. Bestowing these qualities on others can help them to de-program them and yourself. As I mentioned some things that helped me deprogram and literally changed the way I perceive everything in a much different way was a combination of the following: traumatic experience, researching/ reading various subject on philosophy, occult, spirituality, esoteric systems etc, use of entheogens in an appropriate manner, meditation, yoga, self-hypnosis/ trance. Like they say though one persons medicine can be another persons poison. Some of these things such as trauma, bad psychedelic experiences, knowledge/ information without wisdom to apply it properly, etc, can lead to more robotic responses and programming. Everything is subjective to the individual who needs to find there own path through personal trial and error.

Nothing is true, everything is possible. Think for yourself, question everything, fear nothing, and love all.

Search my library http://logoilibrary.com/library/ for many books on hypnosis and trance.