Im sure most everyone is aware of the Flat Earth vs Copernican Heliocentrism dialectic meme that has become increasingly more popular as of recent. Then we have the Hollow Earth/Agartha theory that ties into an Electric Universe model. Tychos being another alternative cosmology model. Lastly, we have Cellular Cosomogony, in which we live inside a concave earth. It would be like the Hollow Earth theory, except we are the ones living inside. Outer-space/the universe would be a ball inside this hollow sphere, this is the theory that will be briefly explored here.

The person modern 'history' credits for originating, or at least who popularized this theory, was a man named Cyrus Teed.Teed was a "eclectic physician and alchemist"that used 'dangerously high levels of electricity' in his experiments. Through his own personal Gnostic experience and interpretations of Emanuel Swedenborg teachings. Teed proposed Cellular Cosmogony, being: we live inside a Concave earth, “vitellus of the great cosmogonic egg.” 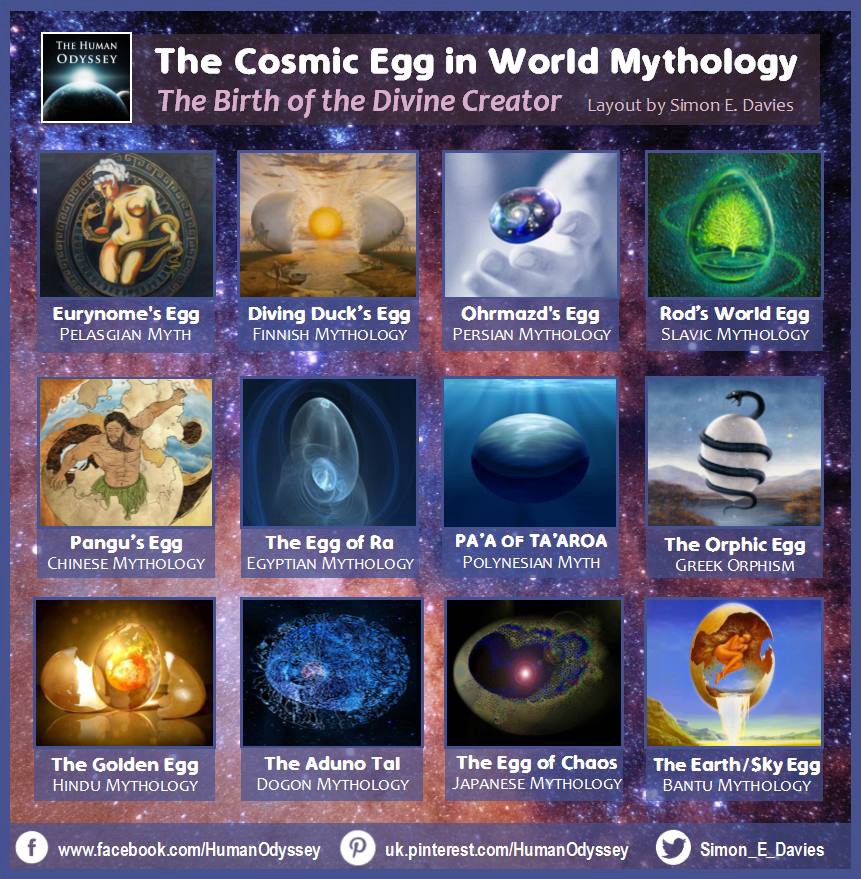 Teed's experience is as follows: “Cyrus Teed's experiments in alchemy often involved dangerously high levels of electricity. In one such experiment in 1869, Teed was shocked so badly that he blacked out. It was during this period of unconsciousness that Teed insists a “divine illumination” occurred. In this alleged mystical experience, Teed believed that God, in the form of a beautiful woman, divulged all the secrets of the universe and urged him to use his scientific knowledge to interpret the Bible.”

"According to this theory, human beings live on the inside of the planet, not the outside; also, the sun is a giant battery-operated contraption, and the stars mere refractions of its light.

You can read his writings at this website: http://koreshan.homestead.com/ or search my library.

Teed performed an experiment using a known straight instrument (the “rectilineator”), the two points at which it would intersect the earth. 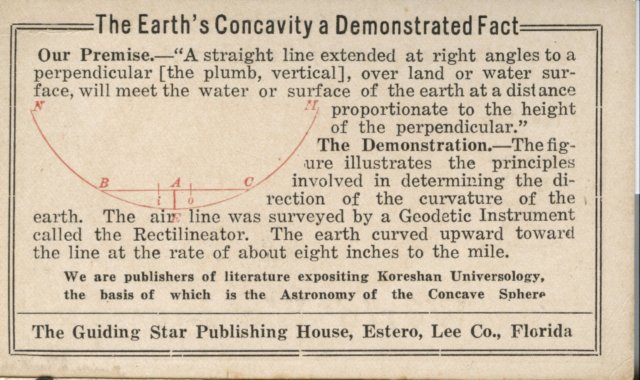 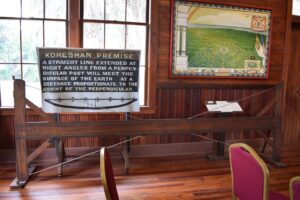 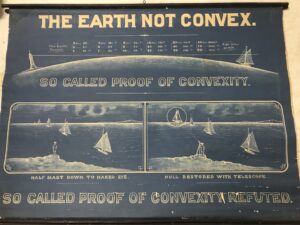 Other Evidence/Experiments from a modern, in-depth research website and forum on concave earth http://www.wildheretic.com/:

"There are four pieces of evidence, that I know of, which purport to show that we live inside a concave Earth. None of the evidence below is 100% conclusive, but two items are very close.

What makes Concave earth theory more interesting is that at least according to this website is that it cannot be proven wrong mathematically: “What's most infuriating is that a little mathematical fiddling turns this crazy theory into a proposition that is virtually impossible to refute. The trick is done by *inversion*, a purely geometric transformation that lets a mathematician turn shapes inside-out. When a sphere is inverted, every point outside is mapped to a corresponding point inside, and vice versa. The geometry is quite simple. If a sphere's center is "C" and its radius is "r," then every outside point "P" maps to an inside point "P'" such that "CP x CP' = r2

Here's a good way to visualize it: For any outside point "P" (on the sun, or Pluto, or Cygnus X, for example), draw a circle that has "CP" as its diameter. From one of the two points where this circle intersects the earth, draw a line perpendicular to "CP." The intersection point {of this perpendicular and "CP"} is the location of "P'". By far the largest body in our inverted Earth is the moon; a bit over half a mile in diameter and some 3,933 miles over our heads. The sun's sphere is only eight feet across. The stars are microscopic spots clustered around the center, which is, of course, infinity. Is there any way to prove we *aren't* inside a hollow earth? We asked H.S.M. Coxeter, mathematics professor at the University of Toronto and an expert on inversion geometry. "I can't think of any," he said. "A rocket flight, an eclipse, a Foucault pendulum, a Coriolis effect -- any observation we can make on the outside of the earth has an exact duplicate version inside. There would be no way to tell which was the truth." Just as the geometry of space inverts, so do all the laws of physics. Toward the center of a hollow Earth, light slows down and everything shrinks -- atoms, astronauts, spaceships, and measuring rods. Light travels in circular paths, producing some weird (but lawful) optical effects...the Australian Journal -Speculations in Science and Technology, has published an article by Mostafa A Abdelkader, of Alexandria, Egypt, that considers in all seriousness the proposal that we really *are* in a Hollow Earth. Abdelkader says that the only way to test the theory's validity is to drill a tunnel straight through the earth. Until such an experiment is performed, he writes, "it seems ... that the odds are strongly in favor of [a hollow Earth] being our actual universe."

"In one chapter of his book On the Wild Side (1992), Martin Gardner discusses the Hollow Earth model articulated by Abdelkader. According to Gardner, this hypothesis posits that light rays travel in circular paths, and slow as they approach the center of the spherical star-filled cavern. No energy can reach the center of the cavern, which corresponds to no point a finite distance away from Earth in the widely accepted scientific cosmology. A drill, Gardner says, would lengthen as it traveled away from the cavern and eventually pass through the "point at infinity" corresponding to the center of the Earth in the widely accepted scientific cosmology. Supposedly no experiment can distinguish between the two cosmologies." -Wiki

Then we have the possible Nazi involvement:

"It has even been reported, although apparently without historical documentation, that Adolf Hitler was influenced by concave Hollow Earth ideas and sent an expedition in an unsuccessful attempt to spy on the British fleet by pointing infrared cameras up at the sky.[45][46]"

"The Nazis entertained many occult theories in their quest for world domination, and Teed's was one of them. At one point a Nazi expedition went to the Isle of Man. Its mission: to get secret photographs of the United States by pointing its powerful telescopes *up*." 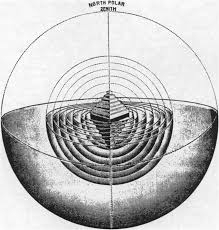 ‘But the whole universe is outside us. Look at the stars ! Some of them are a million light-years away. They are out of our reach for ever.’

‘What are the stars?’ said O’Brien indifferently. ‘They are bits of fire a few kilometres away. We could reach them if we wanted to. Or we could blot them out...

Another interesting fact about Concave topics, is our mental/visual perception to Concavity. The hollow mask illusion being a tangible example, where our mind fills in the empty space and we see concave things as convex. Can it relate to the earth possibly being concave...

What if the actual universe is shaped like a honey-comb, and each cell is another realm/reality/planet. In order to get to another 'planet' you would need to go 'down' through the ground. Could what multiple alternative theories/myths, have speculated as various sorts of 'subterranean' beings, actually be inhabitants of a neighboring cells of the Universal comb. The poles could have exits/entrances from this realm/planet into the others ones. Maybe like The Truman Show movie (true show of man?) ...

Another theory is that our 'planet' is literally a cell of a much bigger entity (the Universe). Or an egg that is fertilizing, or any other imaginings you can think. Egyptian mythology of the'Cosmic Egg' meme says, "an aspect within the Ogdoad is the Cosmic Egg, from which all things are born." Is our concave planet  literally the egg?

With either of these theories it could be a expanding cell, which was touched on in the Lichtenberg figure/fractal post:

'I would like to hypothesize that through these observations, the earth landscape we see, that is believed to have taken millions-billions of years to form and take shape, may have actually happened rapidly via an extreme electrical discharge from the earth or sun, possibly both.

Could a possible cause or product of these discharges be earthquakes? Of course, this would come from other, less accepted, theories besides the currently accepted Tectonic plate friction. One theory is that "Earthquakes are caused by the reverse (inverse) piezoelectric effect from lightning strikes. Lightning strikes originate from the electrically charged Sun which continually charges the Earth with negative electricity creating an electric circuit within the Earth cavity." -WildHeretic Could this be the cause of earthquake light?

No matter what the shape is of this reality it will not have much effect on our present situations and the mastery of yourself.  I enjoy philosophical, theoretical thoughts and dialogue, but do not forget: Maslow’s hierarchy takes precedence to any philosophical theories or higher thought. This is necessary to keep in mind and keep in balance with this when discussing higher-minded philosophical ideas. Spiritual philosophy with no attention to matter will lead to fantasy, escapism and unpractical ideas; materialism with no attention to spiritual philosophy will lead to mammonist, materialistic nihilism (what most of the world is now). Find balance with thought, word and deed.

Chapter on other 'Reality Theories'

Like always, nothing is true, everything is possible, think for yourself and make your own reality.

Here are some links:

Going over some history and math: http://www.skepticfiles.org/ufo1/theory.htm

1 thought on “Cellular Cosmogony: Do we live inside a concave earth?”