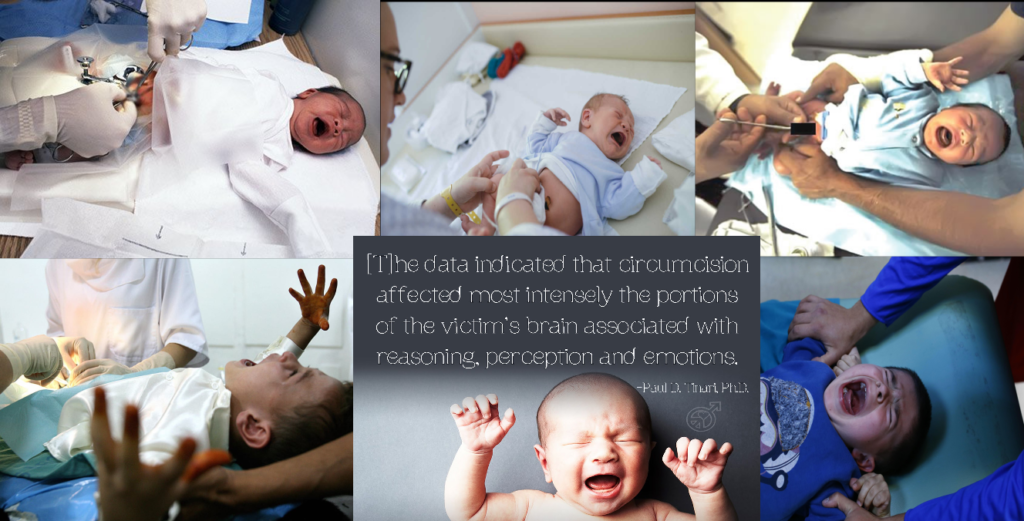 Why do we as 'western' society cut the most sensitive part of a male’s body off at birth? Why do we allow archaic religion and medical propaganda to effect our children’s bodies for the rest of their lives? Why do some sects of a religion suck the blood from the males circumcised wound (Metzitzah b'peh)?  Is it ethical for parents to make permanent cosmetic body modifications to a baby that can not consent?

Trevor Moore saw the absurd insanity in it, do you?

Myth 1: They just cut off a flap of skin.

Reality check: Wrong. In 1997, doctors in Canada (Lander 1997) did a study to see what type of anesthesia was most effective in relieving the pain of circumcision.  As with any study, they needed a control group that received no anesthesia.  The doctors quickly realized that the babies who were not anesthetized were in so much pain that it would be unethical to continue with the study.  Even the best commonly available method of pain relief studied, the dorsal penile nerve block, did not block all the babies' pain.  Some of the babies in the study were in such pain that they began choking and one even had a seizure.

Myth 4: Even if it is painful, the baby won't remember it.

Reality check: The body is a historical repository and remembers everything Rothschild 2000; van der Kolk, 2014). The pain of circumcision causes a rewiring of the baby's brain so that he is more sensitive to pain later  (Taddio 1997, Anand 2000).  Circumcision also can cause post-traumatic stress disorder (PTSD, Ramos & Boyle, 2001), depression, anger, low self-esteem and problems with intimacy  (Boyle 2002, Hammond 1999, Goldman 1999; see Boyle et al., 2002 for a review of trauma effects).  Even with a lack of explicit memory and the inability to protest -  does that make it right to inflict pain? Ethical guidelines for animal research advise avoiding inflicting pain whenever possible whenever possible* - do babies deserve any less?

Myth 5: My baby slept right through it.

Reality check: Not possible without total anesthesia, which is not available. Even the dorsal penile nerve block leaves the underside of the penis receptive to pain. Babies go into shock, which though it looks like a quiet state, is actually the body's reaction to profound pain and distress.  Nurses often tell the parents "He slept right through it" so as not to upset them. Who would want to hear that his or her baby was screaming in agony?

Myth 6: It doesn't cause the baby long-term harm.

Reality check: Incorrect. Removal of healthy tissue from a non-consenting patient is, in itself, harm (more on this point later).  Circumcision has an array of risks and side effects.  There is a 1-3% complication rate during the newborn period alone (Schwartz 1990).  Here is a short list of potential complications. See Goldman (1997) for a thorough discussion.

Meatal Stenosis: Many circumcised boys and men suffer from meatal stenosis.  This is a narrowing of the urethra which can interfere with urination and require surgery to fix.

Adhesions. Circumcised babies can suffer from adhesions, where the foreskin remnants try to heal to the head of the penis in an area they are not supposed to grow on.  Doctors treat these by ripping them open with no anesthesia.

Buried penis. Circumcision can lead to trapped or buried penis - too much skin is removed, and so the penis is forced inside the body.  This can lead to problems in adulthood when the man does not have enough skin to have a comfortable erection.  Some men even have their skin split open when they have an erection.  There are even more sexual consequences, which are addressed in this post.

Infection. The circumcision wound can become infected.  This is especially dangerous now with the prevalence of hospital-acquired multi-drug resistant bacteria.

Isn't it time to think more carefully about whether we should be circumcising our boys?

But, you say, aren't there important health benefits? See this post.

* Ethical guidelines for animal research are listed in the Animal Welfare Act and the Guide for the Care and Use of Laboratory Animals, published by the National Academy of Sciences. Every research facility is required to consult with the institution's veterinarian and its Institutional Animal Care and Use Committee (IACUC). The IACUC ensures that alternatives to using animals was considered and that pain relief is given unless it interferes with the purpose of the study."

"After analyzing nearly 40 years of medical research on the practice, the American Academy of Pediatrics (AAP) has concluded that circumcision does not merit a routine recommendation....Circumcision is not essential to a child's well-being at birth, even though it does have some potential medical benefits," said task force chair Dr. Carole Lannon.

"These benefits are not compelling enough to warrant the AAP to recommend routine newborn circumcision," said Lannon, clinical associate professor of pediatrics and internal medicine at the University of North Carolina at Chapel Hill School of Medicine...Studies show that the relative risk of developing a urinary tract infection in the first year of life is higher in male infants who are not circumcised. But the AAP said the absolute risk of infection remains low, at 1% or less."

Personally I feel circumcision is a type of mind-control via trauma, a way to welcome young male babies into a world controlled by psychopaths (The Masters of Manipulation), who feed off the pain and suffering of others, especially innocent babies. This pain as mentioned in Myth 4,  can cause re-wiring of the brain.  Secondly it (was) is a way to tell the slaves from the non-slaves. The Metzitzah b'peh is for the manipulation of the Life-Force of infants in order to give vitality or perceived vitality to the Mohel.

In conclusion, if you love your child then think about the immediate physical pain and possible long-term trauma you are bestowing upon him without his consent, that will be a permanent body modification. Question everything, including these ritual traditions and medical superstitions that we allow to control our lives. Come to your own conclusions, by using research, critical thinking, skeptical-open-mindedness, meditation, love, contemplation and your experiences. Think for yourself, question everything.

I believe it is time to educate others, speak out and put an end to this Archonic /Demonic practice.

Let me know what you think about this....

You do not need to enter email to comment.